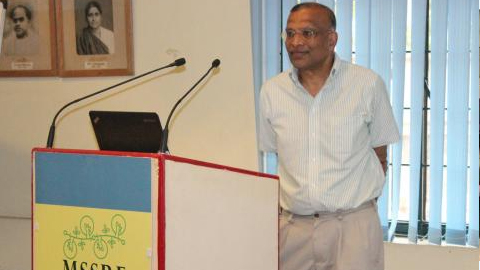 Chennai, March 19, 2019: “United Nations 17 Sustainable Development Goals fail to recognize inter-dependence between the goals and the role of population growth” said Prof Alok Bhargava, an Indian econometrician and one of the pioneers in econometric methods for longitudinal (“panel”) data.

Prof Bhargava is a professor in the School of Public Policy at University of Maryland in College Park, USA. He presented a seminar on a research article ‘Climate change, demographic pressures and global sustainability’ at MSSRF today. The research article emphasised on the reductions in global population growth for maintaining living standards and for preventing environmental degradation.

The important points that he specified as background issues are that United Nations 17 Sustainable Development Goals have failed to recognize inter-dependence between the goals and the role of population growth. Sub-goals such as “Ending hunger and food insecurity”, “Improving education quality” and “Providing adequate sanitation” are adversely affected by population growth. He also pinpointed that skilled labor is critical for rapid economic growth afforded by globalization, and formulation of evidence-based policies is critical in the wake of climate change. Some of the important conceptual aspects from Prof Bhargava’s research article are that role of emissions of methane and nitrous oxide from agriculture is not well studied despite availability of FAOSTAT database and the contradiction of voluntary decline in fertility in poor countries with access to high quality healthcare and family planning services.

The conceptual framework that he presented says reducing “unwanted fertility” especially in remote areas of developing countries should be of highest priority. Prof Bhargava specified about enhancing the agricultural productivity using information from GRACE satellites on terrestrial water storage anomalies and using data on well depths–evidence of population pressures on groundwater depths in India, and said that getting information through GRACE satellites does not work properly and is much more approximate when compared with traditional methods and smap satellite which is much more precise. Lastly, he stressed on the role of fertility rates and education in increasing emigration to OECD countries and the need to harmonize international migration patterns.

Agricultural decision making and remote sensing data from the presentation indicated the importance to grow nutritious crops such as iron-dense rice and beans, and orange flesh sweet potato containing higher β–carotene. It stated that it is important to take into account transpiration efficiency of crops for minimizing groundwater use and pinpointed that Lancet Commission (2019) unrealistically claims that over 10 billion people can consume nutritious diets, when data shows that 2 to 30 billion people around the world are anaemic. The data also showed that drip technologies can reduce groundwater use but hinder aquifer recharge, and that it is important to compare groundwater availability using data on well depths and via GRACE satellites.

The conclusions that were made from the research article are that it is essential to compile and analyze longitudinal data for formulating evidence-based mitigation and adaptation policies for climate change. Simulations and projections based on limited data are unlikely to capture important events and turning points. It is important to emphasize the benefits of small family size in developing countries for enhancing sustainable economic development and well-being.

Currently available remote sensing technologies for assessing terrestrial water storage anomalies have low resolutions and future improvements will facilitate agricultural decision making. It is important to reduce agricultural subsidies in developed countries that are distorting food prices, encouraging over-consumption of refined foods, and fueling the obesity epidem. Renewable energy generation should be subsidized. International migration patterns will benefit from higher education of migrants given the fertility differentials between developing and developed countries. Current levels of greenhouse gas emissions may limit the scope of mitigation and adaptation policies. Climate and agriculture policies will benefit from analyses of the elaborate FAOSTAT database. The reductions in global population growth are essential for maintaining living standards and for preventing environmental degradation.

Dr N Anil Kumar, the Executive Director of MSSRF and Prof MS Swaminathan, the founder of MSSRF were also present during the seminar.

Please check the MSSRF youtube link for full video of this seminar.