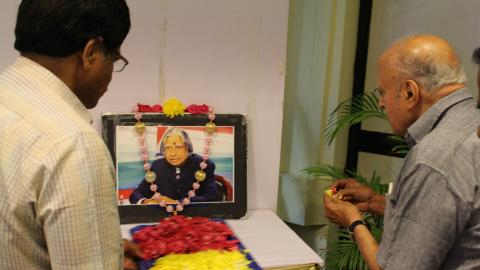 Chennai, July 27, 2017: Even as Dr APJ Abdul Kalam’s memorial was being inaugurated by the Prime Minister at Rameshwaram, MSSRF paid homage to the great scientist on his second death anniversary.

On the occasion, Prof M S Swaminathan, Founder MSSRF, fondly recalled many interactions with Dr Kalam, and his introduction to the ‘Missile Man’ of India by Dr Vikram Sarabai in the 1970s.

Prof Swaminathan had requested Dr Kalam to inaugurate the JRD TATA National Virtual Academy. On hearing the reason behind setting up the Academy, not only did Dr Kalam immediately consent to present the NVA Fellow Awards but asked to be invited for the second year convocation too.

Prof Swaminathan was grateful that he had always been willing to accommodate his schedule to be at important events of the Foundation. He also noted how Dr Kalam believed that people with complementary strengths should work together as ‘unity in diversity’ was the strength of India.

Dr V Selvam, Executive Director, MSSRF, recalled stories he had heard of Dr Kalam while working on the Gulf of Munnar Project with Dr Kalam’s brother and how he was noted for his simplicity.

During the occasion, a song written in honour of Dr Kalam that had been recently released by Prof Swaminathan was also played. The scientists, staff, scholars and members of the MSSRF family paid a floral tribute to Dr Kalam, cherishing his memories and his persona.