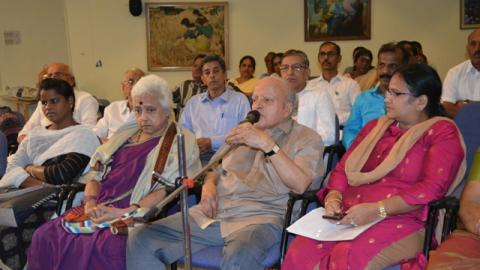 MSSRF, Chennai July 29, 2019: As a tribute to the late Dr Jaya Arunachalaman, a renowned Indian social worker and the founder of Working Women’s Forum, a non-governmental organization, a seminar was delivered by Dr Nandini Azad, the daughter of Dr Jaya Arunachalam at MSSRF today. Prof Swaminathan, the Founder of MSSRF who delivered the concluding remarks in the seminar said that the only tribute that we can pay for such a great icon who has worked for the empowerment of poor women is by continuing her work and he also recalled his memories on requesting Dr Jaya to extend her work in the North East, and that she accepted the request and did a great job.

Dr Nandini Azad is a senior women leader in the cooperative movement at the International, Regional and National levels. A summary of her speech is given below:

As the Club of Rome was seized by the ‘zero growth’ phenomenon in the early 1970’s, the need for bottom-up development of the poor, women and vulnerable emerged changing international development thinking to the era of “growth with equity”. At the same time the first World Conference on Women took place in 1975, the International Women’s Year Dr. Jaya Arunachalam an Internationally acclaimed legendary figure emerged from this decade organizing poor women in the informal sector. The product of the above international environment that necessitated her long march to empowering voiceless women in the unorganized sector. Countering the pillars of caste, class and gender Dr. Arunachalam spearheaded the movement for “gender and equity” initiating the Working Women’s Forum in 1978 and the Indian Cooperative Network for Women in 1981. The rest is history in the annals of the International Women’s Movement.

Dr. Jaya Arunachalam’s work based on practical and sustainable solutions for poor women are based on an alternate development conceptualizing productive, reproductive and community management roles of poor women in a holistic fashion. The realization being that a counter-culture was essential to turn the pillars of caste, class and gender discrimination i.e., countering structural poverty and changing the nature of social relations to empower women. Without which economic empowerment or access to credit would have been insufficient or inadequate. Voluntary Women’s Credit groups for community development were used for social transformation through health care or credit as a means. According to Jaya Arunachalam’s “Credit is a means to promote transformation amongst women from their socially backward situation’. Through demonstrations in villages, lobbying with local Panchayats or local government or petition to national/international governments, the agenda of poor women was advocated and campaigned with policy-makers, implementors. Particularly the current mainstream model in South Asia with its largely welfare and top-down approach often did not allow the empowerment of women”.

Turning the pillars of patriarchy, Padma Shri. Dr. Jaya Arunachalam initiated a counter culture wherein poor women isolated within four walls and with the multi fold disabilities could weave together a new paradigm of “gender and equity;” Not at a theoretical level but today a burgeoning movement of over 6,00,000 women in 14 location of South India with Chennai H.Q. Advocating to International and National Governments that unless poor women participate through self-help and participatory action at various levels of governance economic, social, political – democracy still remains inadequate. Given an equal opportunity, leadership can be built with the resource potential of poor women with special skill training to poor women leaders can multiply. They can save, be bankable invest, accumulate capital and become heads of families/communities. This methodology expanded by communication between the poor as a network welding slum and village communities. Briefly, wherever exploitation and oppression were present, Jaya has been omnipresent force. She has fought bureaucratic constraints, political pressures and charitable overturns.

She has also demonstrated a unique voluntary effort of a vast mass of poor women (i.e., the target group) to policy makers and designers that given an opportunity, the society of vulnerable poor women could be motivated to participate actively in the mainstream institutions (Banks, hospitals, municipalities, police stations) of society. Her greatest achievement is that: she has given a new lease of life and confidence to lakhs of petty women traders whose existence till Working Women’s Forum was initiated one of darkness due to lack of credit, exploitation, ignorance and servitude. As 89% of India’s Working Women belong to the unorganized sector, Jaya’s remarkable effort if duplicated can transform nearly the majority of India’s Working Women. Dr. Jaya Arunachalam has put the marginal earner i.e, the women micro-entrepreneur as a force to reckon within Indian economics, creating a New alternative Development Model for developing countries. A model which is neither sophisticated nor expensive and which requires only consciousness raising and voluntary effort from the grass-roots. Finally, this model not only aims to improve self-perceptions but also the community image of women to improve not only economic growth but aims to develop human resource potential by providing equal opportunity and basic services.

Jaya Arunachalam created leadership at the grass-roots with a difference. Which lasts even today when she is no more. With the Working Women’s Forum (WWF) and the Indian Cooperative Network for Women that continues to be a reckoning force world over – the last torchbearers of Iconic Mass Movement of Women.