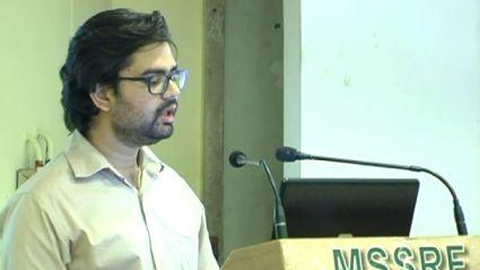 Chennai, June 20, 2016: How can public and private action be used to strengthen the access to nutritious food for under-5 children? This subject that had been the focus of a recent research by the LANSA-MSSRF was presented at the M S Swaminathan Research Foundation on Friday. Researcher Rohit Parasar shared the findings of a study carried out in Tamil Nadu and Telangana on “Value Chain Approach for Studying Supplementary Nutrition Programme”. This approach was taken up as food based value chains cater to a niche market and generally exclude poor.

The focus of the study was on food given through the ICDS and its effects on health of adolescents, women and children in Tamil Nadu and Telangana. The study is of significance given the high incidence of malnourishment in the country and offers chances for eradicating poverty, said Parasar.

In Telangana, the premix for the anganwadi centres is prepared and distributed by a State Government enterprise, Telangana Foods which the study found has can cater in a bigger way than it is doing now. In the case of Tamil Nadu, the rice for the mix is procured from the market through private players and prepared and distributed by women’s cooperatives. The study showed that the presence of the private player has enhanced production process. Earlier all processes were handled by the women’s cooperatives.

The study is relevant as it links agriculture and nutrition and consumers’ awareness of nutrition and affordability. It also finds the importance of producers needing to focus on nutrition, gender and nutrition, food safety and finally the general nutrition status of the population. It could be extended to other states to understand relevance on these factors and focus on improving the distribution channels.