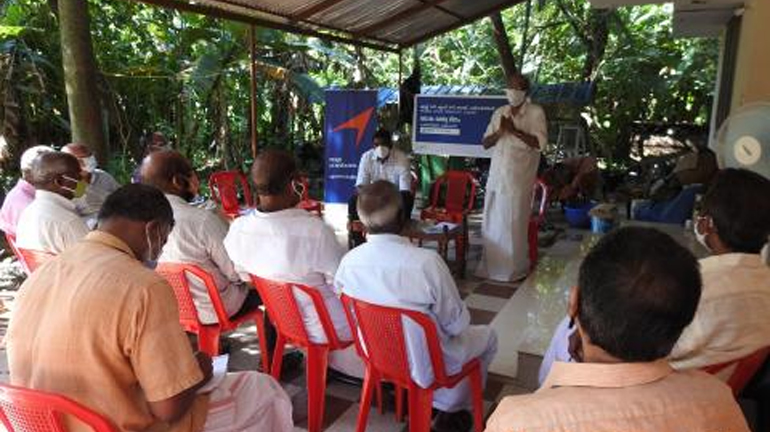 World Fisheries Day reminds us about sustainably managing fisheries resources and ecosystems. In Kerala, the day was observed by Pokkali farmers of Ernakulam for an interface with the faculties of Kerala University of Fisheries and Ocean Studies (KUFOS). Sixteen lead farmers from three villages participated in the interaction on ‘Sustainability of Inland fisheries in the context of Climate Change’.

Pokkali field is a unique ecosystem of central Kerala with rich biodiversity and capacity to generate organic saline tolerant paddy and shrimp/fish alternatively, based on the tidal fluctuations. Pokkali practices have been facing dramatic shifts from age-old paddy-cum-shrimp rotational crop cultures due to intensification of shrimp culture. The Parivartan project here, supported by the Corporate Social Responsibility of HDFC Bank, in its initial phase, is aiming at creating small model farms for the revival of this traditional cropping system, in partnership with two of the leading farmers’ cooperatives.

Fisheries in India is a very important economic activity and a flourishing sector with varied resources and potentials. India is home to more than 10 per cent of the global fish diversity. Presently, the country ranks second in the world in total fish production with an annual fish production of about 9.06 million metric tonnes. Aquaculture in India has evolved as a viable commercial farming practice from traditional backyard activity over three decades with considerable diversification in terms of species and systems, showing an impressive annual growth rate of 6-7 percent. As far as brackish water aquaculture is concerned, it has a long history of traditional practice in Bheries of West Bengal and Pokkali fields of Kerala.