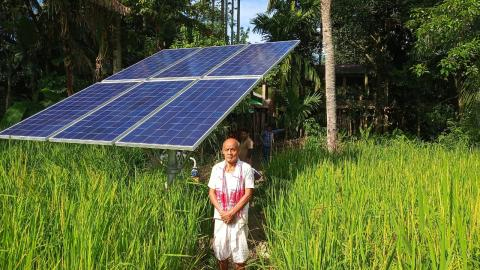 September 2020: The region of Sivasagar in the state of Assam, is a flood-hit area; most farmers here, go for Rabi cultivation after the floods end. The area needs irrigation during the Rabi season although a flood hit area, but it lacks this, making it difficult for farmers during the season. There is a population of around 1000 people and about 250 households who need the irrigation facility.

Over the years, the Assam Government provided farmers with various subsidies. The services are accessed through various existing schemes. However, sometimes, they do not get the

benefit of these schemes because of lack of awareness. In this context, the MSSRF team facilitated a meeting with various line department viz., Agriculture, Fishery, Irrigation, and Veterinary department to bridge the gap between farmers and government departments.

The farmers during face-to-face interaction with officers during the meeting discussed different schemes. These were to be popularized with all relevant details through the Village Knowledge Centre (VKC).

One specific impact was when farmer from Ujoni Bhorolua, Mr. Indreswar Dahotia interacted with the Agriculture department and through the assistance of the VKC, set up a solar pump with 85% subsidy. The pump was set up under the Rural Infrastructural Development Programme.

Following Mr Indreswar Dahotia more farmers in the area also applied for the scheme. One of farmers, Mr. Ajit Kalita has successfully set up the pump this year and about 10 more are in progress. The pump has been a great help in providing irrigation during Rabi season. The solar Pump is very cost effective and needs very less maintenance. Moreover, one hour use of the pump is enough to supply water for 1 ha area for irrigation during Rabi season.

Sharing his views, Indreswar Dahotia says “I have been cultivating Rabi vegetables for a long time now, but irrigation has always been a problem. I pay a lot for pumps and it becomes very costly. After the solar pump was set up, we are getting water regularly without any problem. It is very effective and we can use the same thing for many years with low investment.”

Mr Ujjal Sharma, an Agriculture Extension worker in the area said “There are a lot of schemes that the government provides but farmers are not aware of it. We find it difficult to contact people personally because we reach out to a huge population. With the VKC we can carry out the process and farmers get benefitted. We plan to carry out such activities in future also.”

Thanks to the awareness provided by the VKC, farmers here were able to access the benefits of the government scheme, carry out their farming activities in a better and more profitable way.