We need to depend on home-grown food security rather than imports: Says Vice President Venkaiah Naidu 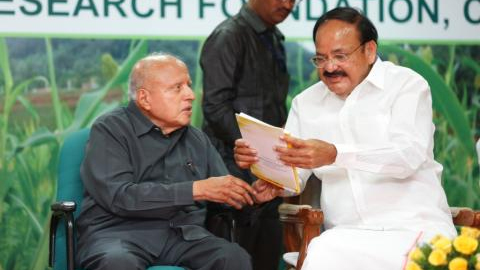 “Agriculture is our basic culture, and our core philosophy is of share and care, which our farmers are doing in the form of providing food”, the Vice President said. While quoting the latest UN SDG (Sustainable Development Goals) report which states that malnutrition has risen for the first time in over a decade, the Vice President said policy makers and politicians should focus more on the issue of malnutrition. He insisted that agricultural production become more nutrition-sensitive and that there be diversification of crop production to include millets and pulses, and not just concentrate on rice and wheat.  He also requested the media to prioritise reporting on agricultural issues.

R Doraikannu, Honorable Minister for Agriculture, Government of Tamil Nadu, noted that people have now come to understand the value of pulses and millets, which is reflected in the increased production of these crops in recent years.

Prof M S Swaminathan, Founder, MSSRF, emphasised how the farming system should be supported by good agronomic practices. He said, “Good soil health leads to good plant health which translates into better human health.” Stating that the Green Revolution had addressed calorie deficiency and achieved food security, and that this was possible due to the interaction of policy and public support, Prof Swaminathan said attention should now be paid to protein deficiency and micronutrient deficiency along with addressing water scarcity.

Dr Ashok Dalwai, CEO, National Rainfed Area Authority, Ministry of Agriculture, spoke about how policy support is usually skewed towards cereals; however the government has recently increased the Minimum support Price for nutri-crops like pulses and oil seeds much more than for paddy and wheat. He called for proper procurement methods for nutri-crops, as in the case with paddy. He said we should promote the Integrated Farming System model which is a “risk-negotiating tool” that can meet nutrient needs of farmers while also increasing their incomes. In response to a question, Dr Dalwai suggested there should be a shift from a consumer approach to a farmer approach. He recommended that agricultural-trade cells be established at Indian embassies so that it would help in export of agricultural produce.

Mr R Venkataramanan, Managing Trustee, Tata Trusts, said that incentives drive behaviour and that changing the behaviour of crop growers by even a small extent can lead to greater benefit towards nutrition.

Dr R Rukmani, Director, Food Security, MSSRF while presenting the findings of the MSSRF’s Leveraging Agriculture for Nutrition programme across four states i.e. Bihar, Andhra Pradesh, Odisha and Maharashtra pointed out that there is currently no policy on biofortified crops. Formulating a policy could consider the aspects of educating farmers in the domain apart from setting up farmer-led seed banks.

Shri R Balakrishnan, IAS, who spearheads the Millet Mission of Odisha, asked for convergence rather than coordination in all aspects, in terms of planning and budget implementation. The Government of India, civil society and academia must work together, he added. “Odisha has a Nutrition Secretariat to bring a nutrition-orientated policy to agriculture,” said Balakrishnan, adding that it would take into account all the recommendations made by National Consultation on Leveraging Agriculture for Nutrition, as listed by Dr Rukmani.

Shri M Nedunchezhiyan, Principal Scientist, ICAR-CTCRI (Indian Council for Agricultural Research –Central Tuber Crops Research Institute), said, “Tuber crops have high content of protein and minerals when compared to rice and should be called as ‘power bank crops’ rather than as poor man’s crop. However, storability is an issue, but this can addressed by drying it and cutting it into chips or powdering it and mixing it with wheat flour for chapathi.”

Dr Lakhan Singh, ICAR, -Agricultural Technology Application Research Institute, Pune said there should be convergence between Krishi Vigyan Kendras, the Integrated Child Development Services and the line departments and there should be innovations for adoption at multiple levels by farmers.