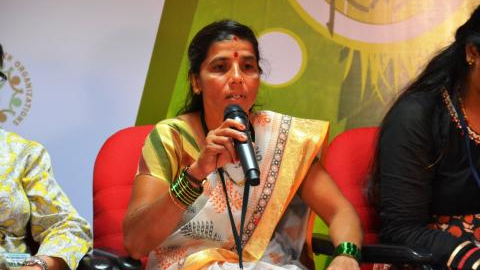 When Pratishtha Prakash Bhere, woman farmer from Maharashtra spoke she needed a translator for the 300-plus international audience to understand. However, what she said about overcoming the challenge she faced in being a woman farmer, was however, the highlight of the session on “Gender Relations and Family Farming” during the Asia Pacific Consultation on Achieving the Zero Hunger Challenge, being held at MSSRF.

Pratishtha’s message on starting the change from within the family to create a change in the community rang loud in a session that emphasized the importance of focusing on women as key agents of development in rural India. According to an IFAD report, agriculture and related sectors employ more than 90 per cent of the total female labour force.

Highlighting the need to address gender inequities especially in the context of achieving food security, Dr Kanayo F Nwaze, President IFAD, said that “evidence clearly shows that when women have money, they spend a large proportion of it on improving family nutrition and well-being – whether that means school fees, healthcare or adequate clothing.”

IFAD-supported work in the country has more than 116,000 self-help groups with 1.5 million members who have been an effective way to reduce gender-based violence, change social attitudes and enable women to start up small businesses.

Emphasizing the role of women as agents of change, agents of development and their empowerment can contribute towards building a more equitable and secure world, said Professor M S Swaminathan who called for the need for a separate policy to address the rights of women farmers. “The physical labour of women has been noticed, but very often their intellectual ability or contribution goes unrecognized. There is need to recognize their intellectual contribution and address this inequality, to address food and nutrition security.”

Professor Nitya Rao, University of East Anglia and Gender expert, called for the need to bring out the 3 Rs in “Recognizing women and men as equal partners in family farming, Redistributing resources across genders, Representation and Voice in Decision making” ensuring gender equity.

Jean D’Cunha, UN Women spoke about the prevalence of violence against women across the region and its implications on the safety of women and on their ability to engage in economic activities or public life. Govind Kelkar, Landesa elaborated on the gender-specific barriers to women’s ownership of land and assets and on what could be done to reduce the gender differences in agricultural productivity.  Kalpana Sharma, columnist and writer on gender issues moderated the panel, highlighting the need to not only sustain but ensure there was no dilution in carrying the gender agenda forward.