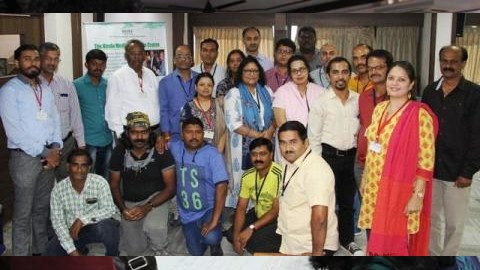 May 31, 2018: The press in India has a significant role to play in relaying the importance of conserving local biodiversity. Coastal systems management scientists, climate change and biodiversity conservation experts cautioned against the rapid advancement of biodiversity loss and ecosystem degradation that is undermining the supply of ecosystem services vital for mitigation and adaptation in the country. Media was called upon to champion for biodiversity conservation that would help achieve climate change adaptation especially for the vulnerable East coast of India. The 3-day workshop is organized by M S Swaminathan Research Foundation (MSSRF) and National Biodiversity Authority (NBA) at Kakinada, Andhra Pradesh.

Prof M S Swaminathan, Founder MSSRF said: “From microbes to man, biodiversity plays a key role in human life and media must a valuable role in promoting bio-literacy among the public.” He reiterated that conserving biodiversity cannot be done only by the government, or the Forest Department. “People’s own efforts to conserve biodiversity are very important with coastal areas needing most attention, with women playing a key role in conserving local biodiversity.”

Dr B Meenakumari, Chairperson of the National Biodiversity Authority, spoke about how the National Biodiversity Act 2002 should be implemented and used in a sustainable way. She called for the media’s support in getting the right information to public to raise awareness on how conserving biodiversity can help address larger environment and climate changes problems. She also suggested that a regular space in the media to highlight such issues should be a regular feature for sustained public sensitization.

Mr Rabikumar, Secretary National Biodiversity Authority, spoke on the Access, Benefit Sharing (ABS) in the National Biodiversity Act. Drawing attention to 2017 Earth Overshoot Day, he voiced that at the rate we overshoot what the earth has to over us naturally, we will soon run short use all environment resources and generations to come will face serious consequences. He reiterated that biodiversity conservation is everybody’s business and requires the support of all stakeholders for sustainability and preservation.