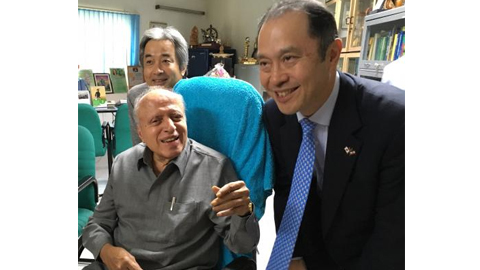 Chennai, December 06, 2017:  Some years ago in a remote village in Koraput district in Odisha, a group of women gathered to pray in front of something that was going to make a big difference to their lives. It was the first street light that the village was getting. For a village yet to get electricity connectivity, this was a moving and life changing experience. These lamps and the reverence of the people were made possible by the first partnership that M S Swaminathan Research Foundation and Mitsubishi Corporation entered into nearly a decade ago.

It was in continuation of this partnership that Mr Eisuke Shiozaki, Chairman and Managing Director Mitsubishi Corporation India Ltd. Launched a series of development programmes in rural Andhra Pradesh.

For a corporate, while profits may be the lifeline to survive, it is the value system and the principles that make a difference in shared value said Mr Shiozaki, speaking at the Millennium Lecture organized by MSSRF here. He took the audience of scientists and students through his talk on “Mitsubishi Corporation’s Initiative to Ensure Sustainable Growth”.

Mr Shiozaki had visited and interacted with the communities during the launch of various development programmes of MCI India and MSSRF.  “Changes in the mindset of individuals are very important to create a sustainable society,” he said expressing his pleasure at the manner in which communities had made a change in areas where development work had happened.

Giving examples of how business to add value such as in recycled waste or eco-friendly town development, Mr Shiozaki said while profits for corporate are a lifeline to survive, respect for resources embedded in the Japanese philosophy of ‘Mottainai’ was very important. Social innovations and introductions of new technologies, transition to low carbon from environment unfriendly systems were some of the ways in which sustainable development could be pursued he said. Appreciating the introduction of GST he said, “GST helped our foreign companies to enter the Indian market as it made it much simpler to understand.” Also on the mandatory CSR, he said when it was an obligation when everyone would start thinking about it.

Speaking on the occasion, Prof Swaminathan, Founder MSSRF, recalling Gandhiji, spoke of how he had emphasized sustainability even decades ago. Speaking of sustainability science, he appreciated institutions such as Mitsubishi for putting out their efforts for community development. Resources have to be used for common good, especially natural resources, he said.

Mitsubishi Corporation has engaged in a series of initiatives in partnership with MSSRF in Odisha, Andhra Pradesh and along the eastern coastal regions. The lecture is part of the Millennium Lecture series of MSSRF where eminent personalities share their work and vision for sustainable development.