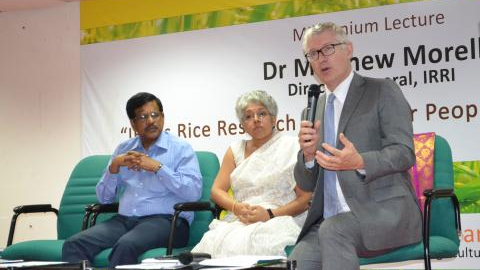 Chennai, February 10, 2017: The International Rice Research Institute (IRRI) has ‘Climate Change Ready Varieties’ of rice that can help provide additional resilience to the farmers” said Dr Matthew Morell, Director General, of the IRRI. Delivering the Millennium Lecture at M S Swaminathan Research Foundation on February 10, 2017, Dr Morell emphasized the importance of rice for consumption and for farmers. The climate-ready varieties could face adverse conditions of stress such as salinity, drought, flooding and heat.

The IRRI, located in Philippines, has over 127,000 accessions of wild rice in its genebank, but only 5% of them have been used for breeding, he said. Referring to rice as the ‘engine of food security’, he said it feeds 4 billion people and supports over 144 million farm families across the world and will continue to be important in the future as well.

Dr Morell emphasized that it was important to focus mostly on disadvantaged areas where it is a challenge to increase yields and improve farmers’ livelihoods. He said the world needs collaborative efforts between institutions in rice research education.

Speaking on the occasion, Prof M S Swaminathan referred to the Govt of India’s announcement that they would double farmers’ income in five years. “Apart from productivity and sustainability small and marginal land holding, farmers can greatly benefit from using every part of rice biomass in farming practices. MSSRF has set up a Rice Bio Park in Myanmar that will help utilize every part of the plant“, he said. Emphasizing on the importance of rice in the context of climate change, he said, its versatility has made it the crop of the future.

Dr Madhura Swaminathan, Chairperson, MSSRF who chaired the session, said that while many institutions were working on varieties to withstand climate change, it was interesting that IRRI had ‘Climate Ready Varieties’.

The  IRRI is the world’s premier research organization. It is an independent, non-profit, research and educational institute headquartered in Los Baños, Philippines.