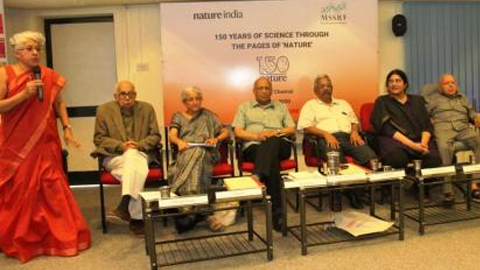 Chennai, March 6, 2020: A panel of eminent scientists today, emphasized on increased focus and investments in scientific research in the country. They were speaking at an event on ‘150 years of science as seen through the pages of Nature’ at the M S Swaminathan Research Foundation today. Held as part of the 150 years of celebration of Nature Research Publishing in partnership with MSSRF, six eminent scientists spoke on various aspects of science in India.

Cautioning that India is described as a ‘hot zone’ for infectious diseases, Dr Shahid Jameel, CEO, Wellcome Trust / DBT India Alliance highlighted the most recent corona virus outbreak as an example of how we need to be prepared. Citing that SARS cost an estimated $ 40 billion in losses, he said, “It only costs a fraction of time for preparedness; however, we need to work when we don’t have an outbreak. Most ingredients for active pharma industry are from China. With the corona outbreak, what will happen to our drug industry? National security is therefore, not just about arms and tanks but about health; health security should be considered a national security,” he emphasized.

The Chief Editor of Nature India, Ms Subhra Priyadarshini traced the 150 years of research and landmark publications that had come out from the Nature stable. Also, it had transitioned from its earlier mission of aiding ‘scientific men’ to now focusing on diversity and gender equality.

In a fascinating talk that traced the ‘150 years of genetics’, Prof M S Swaminathan, Founder MSSRF spoke of various milestones brought out in Nature scientific journal, and how all major discoveries had been recorded in Nature. He paid a special tribute to editors of the journal and called for increased emphasis on science communication.

Pushing for risk-taking to promote scientific temper Dr Sandhya Koushika, Associate Professor Tata Institute of Fundamental Research, Mumbai said “Cultural changes are the biggest and hardest challenges to innovation,” adding “it isn’t a gloom and doom scenario in India, and there is innovation and good science happening.”

Prof Nitya Rao, University of East Anglia, emphasized on gender equality in science, and specifically focused on stereotypes. “Technology has diverse social impacts on different groups of people: Product design keeps the male user in mind, Artificial Intelligence technologies can also include and introduce biases of gender and ethnicity,” she said. Echoing her, Dr Koushika added, “There’s a clear pipeline problem in science, where more than 50 per cent are women at the graduation level, but through the pipeline, that number drops drastically.”

Prof T Jayaraman, Senior Fellow Climate Change, MSSRF emphasized on the need to have a realistic picture of the climate change scenario since many projections including carbon budgets have not been assessed. Dr Madhura Swaminathan, Chairperson MSSRF moderated the panel and spoke of the increasing need for rationalism and science. Dr G N Hariharan, Executive Director, MSSRF, highlighted the seeds sown by Sir C V Raman in setting up the Foundation and the important connections to science including Nobel Laureates Norman Borlaug and James Watson’s visits. This event reinforced the role of MSSRF as a scientific institution, he said.

The event was well-attended by the scientific fraternity besides participants from various institutions.