Emancipation of small and marginal farmers through entrepreneurship and land pooling for farming: Mr Raghavan 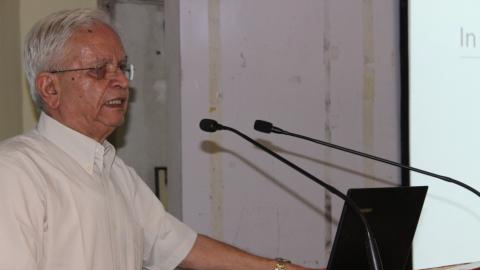 While he felt there were many constraints and threats within agriculture, he also found there were opportunities. The model that Mr. Raghavan proposes is to pool the land of the farmers in a village for scaling up the produce and to nominate a youth to sell the produce directly through a mobile market.

The suggestions that he proposed are:

Mr. Raghavan’s technical team which includes professionals from marketing, accounting and entrepreneurs with farming experience have piloted their work in two villages namely Nattampudur, in Trichy District and Achanayakpatti, in Pudukkottai District, but for various reasons it could not be expanded. But the team hopes that their model could be scaled up and replicated so that the farmer’s life could be free of drudgery and farmers could market their produce without the hassle of going through intermediaries.

Mr. Raghavan narrated the incident which was to be the inspiration for him to work with the small and marginal farmers.Mr. Raghavan was one of the Directors in charge of a IBP project in North East part of India. “When I went to the project site I found abject poverty, right from Guwhati up to Golaghat (about 200 kms). I found women carrying their children in rickety and there was hardly any agriculture”, he said. So after purchasing about 670 acres of land through the office of the Assam government for the refinery, he felt he had to do something for the farmers there to keep them afloat. He proposed buying another 100 acres of land, bring the farmers there and start a company, and link them with the technocrats of agriculture to start something there. He believed that 20 years hence the children of the famers would become artisans and could be absorbed by the refinery, as there was a severe shortage of labour there.

The talk was attended by scientists, researchers, staff and members of the public.