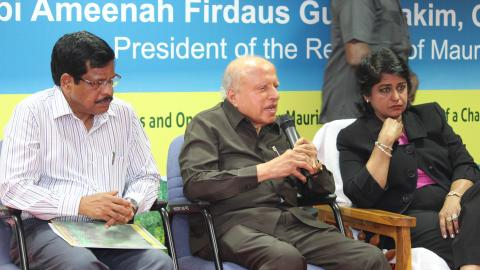 Chennai, November 18, 2017: “Climate Change is not a buzzword any more, it is a reality,” said Mrs Ameenah Gurib-Fakim, President of the Republic of Mauritius on the occasion of the Millennium Lecture at M S Swaminathan Research Foundation on November 18, 2016. Speaking on the topic, “Challenges and Opportunities for Mauritius through the lens of a Changing Climate”, Mrs Gurib-Fakim who is a scientist and the first woman President of her country, dwelt at length on the various efforts being taken by island nations such as Mauritius that are highly vulnerable to adverse effects of climate change.

“In Mauritius, the beaches are being rehabilitated, especially those sites that are most vulnerable so that they are less exposed.” She spoke for solidarity from the world. “Climate financing will help relieve economic  burden of adapting to climate change impacts” and called for fair and equitable terms to access technology and financial resources for small island developing states.

Speaking of the very special relationship that Mauritius had with India, the President expressed the hope that there could be ways of looking at ways of partnership and collaboration with India especially to cope with climate change risks.

A genetic garden of halophytes – naturally occurring salt-tolerant plants – established by MSSRF in Vedaranyam, Tamil Nadu was inaugurated through video conference by Mrs Gurib-Fakim. Plants such as these are especially important in the context of increasing salinization of land, one of the adverse effects of climate change. Introducing the garden, Dr V Selvam, Executive Director MSSRF said the potential of halophyte for food for people, fodder for livestock, bio fuel and for ornamental purposes was being explored and all of these could reap rich rewards in anticipatory research for climate change.

Commenting on Her Excellency’s speech, Prof Swaminathan said, the millennium lecture clearly brought out the emerging challenges caused by climate change. Among the different consequences of climate change, an important one,  he said, is the rise in sea level caused by global warming. Islands like Mauritius will have to plan in advance methods of meeting the challenge. MSSRF from its very inception in 1989, has been working on protecting coastal communities from the adverse impact of a rise in sea level. Bioshields of mangroves and other halophytes have been promoted through the participation of local fisher and coastal communities, he added.

Commenting on the  first halophyte garden, he noted, “This Gene Bank will be a source of genetic material for breeding new varieties of crops tolerant to coastal salinity. Also, this genetic garden will help in promoting below sea level farming, as it is already in practice in Kuttanad in Kerala. 97% of the world’s water is sea water. Therefore, sea water farming will help to strengthen coastal food security and employment”.

Talking about the  effects of a rise in temperature by 1.5 degree celsius, he said “an increase in temperature will lead to a reduction in wheat production in North India by about 7 m tonnes each year. Therefore anticipatory action to meet the challenges of higher temperature, more recurrent drought and floods and sea level, will be very important for avoiding the emergence of climate refugees.  The millennium address by H.E the President of the Mauritius is therefore a timely one”.