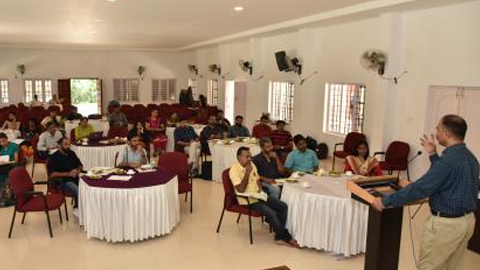 Wayanad, Kerala, November 29, 2017: A strategy is needed to conserve biodiversity in Wayanad and to make it a model conservation district said Prof M S Swaminathan, Founder MSSRF at a media workshop on biodiversity here. Speaking on video from Kottakkal, Kerala, Prof Swaminathan emphasized that there was need to dialogue with media to bring greater discussion on this subject. Expressing concern that genetic erosion is happening to our mega diversity, he reiterated that every gene and species was precious. Wayanad is considered a biodiversity hotspot in the country.

The workshop is organized by MSSRF in partnership with the National Biodiversity Authority (NBA). Chairperson NBA, Dr B Meenakumari, speaking from Chennai said, “While technological advancement is important, a basic need for life is food. We need to remember that only by preserving our biodiversity we ensure the continuance of our human survival.”

India’s Biological Diversity Act, 2002, has been put in place to provide a framework for sustainable usage of resources and equitable benefit sharing. “The importance of biodiversity is so high that the Parliament has considered violation of this Act as serious as a capital offence,” said T Rabikumar, IFS, Secretary, National Biodiversity Authority. He explained how this was not a standalone subject. Its connection with other aspects was so high, that as many as 27 Indian ministries were linked to biodiversity in one way or the other.

The manner in which media had been consciously and unconsciously covering biodiversity was shared by Mr Gopikrishna Warrier, Contributing Editor Mongabay. He spoke of the need to link local stories to global issues and use data effectively so that it could be related better to the international dialogues. Another brief study on media coverage on environment issues done by MSSRF also shared how the concern related to biodiversity was present, but the term was rarely used.

Prof Kunhikrishnan, noted environmentalist, shared data related to how numerous species were now being eroded, especially along the Western Ghats. Dr Anil Kumar, suggested that the media can link

biodiversity to other topical themes such as climate change and link them in an emotional manner along with data so it could make an impact.

Over 30 journalists from Kerala, Tamil Nadu and Karnataka participated in the 3-day workshop that began today. The workshop includes field visits to different locations to understand first-hand efforts to conserve and the importance of biodiversity conservation.