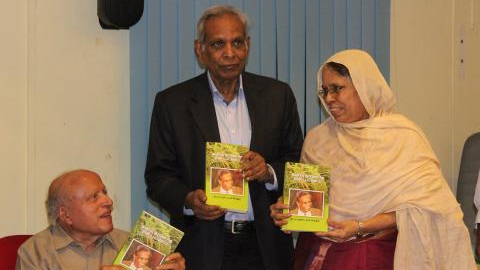 Dr K Muralidharan, Former Principal Scientist, ICAR-IIRR summarised the book and described significant portions of Dr Siddiq’s life. With a difficult beginning particularly with regard to his academic life, Dr Siddiq went on to become an agricultural scientist and was involved in developing high-yielding varieties of rice, especially a dwarf variety of Basmati rice and other hybrids (Pusa Basmati varieties). He also went on to receive many awards for his work, including the Padma Shri in 2011. Dr Siddiq credits his achievements to his guru, Prof Swaminathan whom he worked with while pursuing his doctoral thesis in cytogenetics at the Indian Agricultural Research Institute. In fact, Dr Siddiq said Prof Swaminathan was the reason behind him entering the agricultural science field.

Speaking on the occasion, Prof Swaminathan said it was his privilege to have worked with Dr Siddiq, whom he described as a very positive person. “Dr Siddiq has done remarkable work and will also be an inspiration to young scientists, who sometimes feel helpless in their work,” said Prof Swaminathan. He said one of Dr Siddiq’s main qualities was his determination to solve all problems that were thrown at him. Prof Swaminathan also thanked Mrs. Fathimuthu Siddiq for her constant support to Dr Siddiq, and whose influence was instrumental in Dr Siddiq setting up a rice institute in Egypt, when he was deputed there on work. Mrs Siddiq had written about her visit to Egypt in a critically acclaimed book in Tamil.

Dr K V Raman, Former Member, Agricultural Scientists Recruitment Board, while citing of Dr Siddiq’s many achievements also recalled their association when they were neighbours. He said, “Artificial intelligence may be the future but people like Dr Siddiq have shown that natural intelligence is important and will prevail.” Dr Raman praised Dr Siddiq for not just his scientific skills but also for helping educate the needy through his Trust (ESFT Trust).

Mr Hidayatullah, Chairman, Council for National Integration, Tamil Nadu said Dr Siddiq credits all those who helped him come up, as mentioned in the Sanskrit saying matha, pitha, guru and deivam (mother, father, teacher and God).

While thanking the panel for their gracious comments, Dr Siddiq said he had actually no intention of writing a book, as he felt he was not important enough. But with encouragement from friends and family, especially his wife, he was able to complete the book.