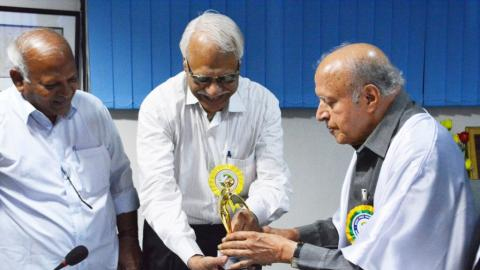 In his acceptance speech, Prof. Swaminathan spoke of how the ideals of the Foundation including a pro-poor, pro-woman and pro-nature approach were similar to that of the WPFS. He expressed happiness that there was a link made between peace and hunger and said “where hunger rules peace cannot prevail”. Quoting Albert Einstein and Bertrand Russell, he said “Remember your humanity and forget the rest. If you can do so, the way lies open to a new paradise; if you cannot, there lies before you the risk of universal death”.

Prof.  Swaminathan emphasized how the work of the WPFS and similar organizations is required to bridge the various divides present including the economic divide, the gender divide. He noted that government alone cannot do development work and it requires the people’s support too.

The World Peace Festival Society has been giving the Shanthi Dootha Awards since 2007. It is given at the District and State level and also to one common person involved in welfare work at the National level every year. A ‘Bal Shanthi Dootha Award’ is also given to a deserving child. During the occasion Dr. Anees Siddique, General Secretary of WPFS, Mr. Sirojoddin, Founder of World Peace Festival and Prof B Suresh Lal, Head, Department of Economics, Kakatiya University, Warangal spoke.