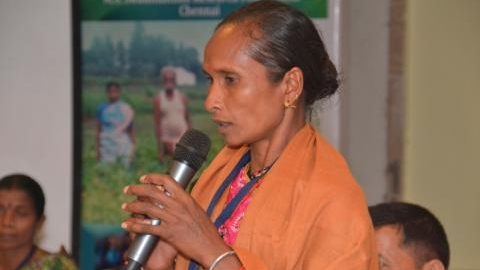 It doesn’t get simpler than this. A mud pot with a cover of cow dung serves as a means to preserve traditional seed varieties.Families and communities such as that of the demure Sunamani Paraja from Koraput district, Odisha use these kinds of simple methods to become “custodian farmers” or conservation champions in their community.

“Custodian Farmers” are ordinary farming community members, who have knowledge of and access to diverse seeds and resources and who help conserve biodiversity in their region. Sixteen farmers from across India – Kolli Hills, Jawadhu Hills, Nainital and Koraput presented such simple means by which knowledge transmitted across generations had been preserved.

Natesan from Kolli Hills for instance shared the agriculture – social customs link. “Millets are traditionally used in our social rituals from the times of our grandfathers. This helped reinforce the habit of eating millets, keeping us healthy and also motivating us to grow these crops.”

The custodian farmers were speaking at a two-day update on “Experiences of Rural Poor Communities and their On-farm conservation Efforts”, held at MSSRF in Chennai. The project co-ordinated by Bioversity International, Italy and funded by International Fund for Agriculture Development (IFAD) looks at placing more emphasis on neglected and under-utilized species through on-farm conservation efforts. The event was attended by NGOs, farmers, students and researchers working on the subject.

As part of the recommendations, experts called for the need for a labelling products as “conserved” on-farm to provide recognition for the efforts of traditional agriculture communities and for a national body to certify the ecological significance of these products. There was also a suggestion to move towards “biofortification” or the enhancement of nutritive value of a particular crop through natural occurrence, purposeful selection or genetic modification dependent on appropriate approvals. This would help to increase the nutritional status and move towards Zero Hunger.

Prof M S Swaminathan went a step further to say “Protect, encourage and reward these custodians. Women especially have a major role to play in preserving biodiversity.” He suggested the inclusion of millets in the mid-day meal programme as it made sense from the point of view of nutrition as well as climate resilience for food production.

Dr Stefano Padulosi, Global Co-ordinator from Bioversity International presented the recommendations suggested through the discussions, emphasized the need for strong policy advocacy at the national level to promote these crops as they were useful from the point of view of climate change as well as nutrition. “Nothing is as fulfilling as seeing the effect and positive change that is happening in the lives of these poor people,” he said.

This thought was echoed by the students who listened to the farmers and experts. Said Prashanth from a Chennai city college,”Although I am from an agricultural family, we are no longer growing millets that I used to remember as a child and in fact we do not cook them anymore. My friends have even less idea about these crops. Listening to these custodian farmers, I feel like attempting a revival in my own village.”

Concerns from production, procurement to distribution and value addition of millets in the form of ready-to-eat or marketable products were also shared and discussed at the meeting. The participants also spoke about the possibility of forming a consortium towards supporting on-farm conservation efforts.

In traditional agriculture communities, there are a small number of farmers who possess knowledge gathered through experience passed on over generations. These farmers apply this information on traditional seeds and crops, promoting them in their local communities.

Having a variety of crops, rather than relying on just a few crops, is one of the ways of dealing with issues such as climate change, reducing malnutrition and alleviating poverty. Amidst growing concerns of loss of biodiversity, these “custodian farmers” are seen as innovative farmers and seen as conservation champions in their communities.

Now, there is global recognition of the importance of these farmers, especially as international efforts towards on-farm conservation have not been that comprehensive.