Remedies and Response to Ailing Agriculture in the Union Budget: Prof Swaminathan 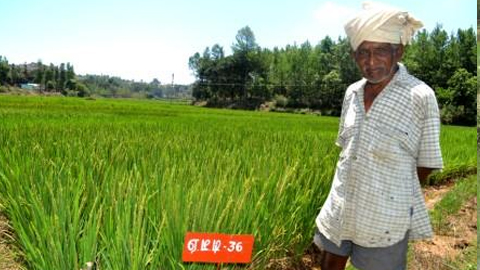 Comments of Prof M S Swaminathan, Former Member of Rajya Sabha on the Union Budget 2018-19 presented by the Finance Minister to both houses of Parliament on 1st February 2018

February 1, 2018: Some of the strengths and weaknesses of the economy are summarised in the Economic Survey (2017). One of the weaker sections of the economy is agriculture which provides employment to 49% of the population. Contribution of agriculture to GDP has been going down and now stands at about 16%.

Agriculture is very sensitive to climatic conditions. Both climate variability and market volatility affect the income of farmers. In fact the Economic Survey points out that farm income may decline by over 4% in a year. Heavy rainfall reduces income by 13.7% and 5.5% for kharif and rabi respectively. What can be done to impart both market and income stability for National Food Security? The Economic Survey identifies the potential adverse impact of climate change on agriculture as most important. Farmers all over the country are also asking for higher prices in order to improve their income. They would like the implementation of the Swaminathan Commission to provide a procurement price of C2 + 50%. The Prime Minister has been advocating steps that would help farmers double their net income in five years.

How does the budget respond to the above challenges?

The budget provides for the greater use of clean and renewable energy sources but does not deal with the management of climate change in relation to farming. It is important to set up climate risk management R&D centres at least one at every block level. Such centres should be supported by trained Climate Risk Managers, one woman and one man from each Panchayat. Climate Change could become a mega catastrophe and there is need for immediate steps both in the areas of mitigation and adaptation.

Here, the Budget contains provisions which can insulate farmers from distress sale and poor income. The Finance Minister announced that as per pre-determined principle, the Government has decided to keep the MSP for all the unannounced crops of kharif at least at one and half times of their production cost. It is essential that if price of the agriculture produce in the market is less than the MSP, then in that case Government should purchase either at MSP or work in a manner to provide MSP for the farmers through some other mechanism. If income is less than the support price, the government has said that it will make efforts to buy the surplus produce of the farmers.

More allocation will be made for building warehouses and by upgrading 22,000 rural haats into Grameen Agricultural Markets. The budget also sets apart Rs. 2000 crores for an agricultural market and infrastructure fund. Several steps have been proposed for promoting sustainable agriculture such as organic farming. Horticulture will be promoted with greater attention to the marketing of tomato, potato and onion and similar perishable commodities through ‘Operation Greens’ with Rs 500 crore allocation.

Another welcome feature is to integrate attention to fisheries and animal husbandry with Kissan Credit Cards. The National Bamboo Mission will be restructured in order to enhance the cultivation and consumption of the bamboo products. The emphasis placed on Self Help Group formation, cooperatives and other organizational methods which can provide the power of scale to the small scale producers is welcome. In the promotion of organic farming, the greater encouragement will be given to Self Help Groups of women farmers under NRLM.

In the case of employment and income greater emphasis will be placed on post-harvest technology and value addition to primary products. Rs. 10,000 crore corpus will be provided for the fisheries and animal husbandry sectors.

Since agriculture promotes job-led economic growth, greater support will be given to both on-farm and non-farm employment. The priority given to rural infrastructure and irrigation will help impart stability of income and employment. Malnutrition is another serious problem and we need to promote symbiotic linkages among agriculture, nutrition and health.

On the whole, the Budget addresses some of the “hotspots” in the field of farming, the most important being the management of the monsoon and the market.