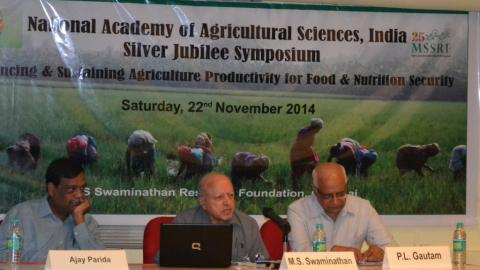 India has one of the highest levels of malnutrition in the world. To address this, the National Academy of Agricultural Sciences (NAAS) today, announced that it would take up the Zero Hunger challenge and recommend to the Ministry of Agriculture to push for an International Year of Underutilized Crops. Speaking at the inaugural session of the Silver Jubilee Symposium of NAAS, Founder President and Founder Chairman MSSRF, Prof M S Swaminathan called for the need to focus on climate-smart and traditional varieties of crops such as millets.

“Farming is the largest private sector enterprise in the world” said Prof Swaminathan “and with the largest number of youth in the world in India, we need to give greater emphasis on productivity in farming to attract more youth.”

Vice-President, NAAS, Dr P L Gautam, said the recommendations from this symposium would provide a roadmap to increase productivity in agriculture and move towards an “evergreen revolution”. There was limited research and technological improvement in crops such as millets, leading to their decline over the years.

Professor Nagarajan, Advisor LANSA linked the social and development issues in some of the most vulnerable regions of India, to hunger. “We need to invest in technology, we need to invest in small farmers and we need to ensure de-centralized and easy access to techniques for greater productivity. This will help move towards greater nutrition through better agriculture practices.”

Dr Ajay Parida, Convenor, Chennai Chapter of NAAS, said this body consisted of unique individuals who had made notable contribution to science and technology and called upon more young scientists to join the fraternity of NAAS through significant work and research.