Stakeholder Consultation and Release of handbook at Rameswaram 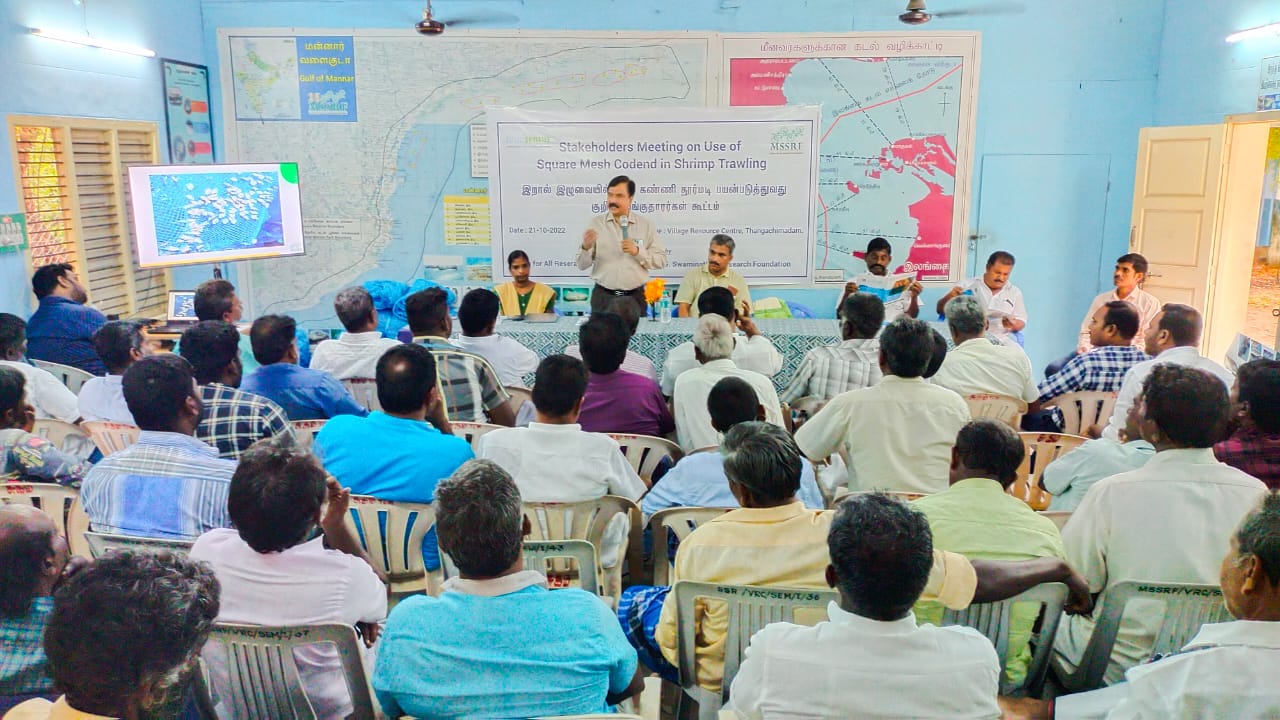 Dr. G. N. Hariharan, Executive Director – MSSRF and chief guest of the programme released the handbook on ‘Voluntary Code of Practice (CoP) on Flower Shrimp Management in Palk Bay region’. The CoP on flower shrimp management was developed in Tamil to sensitise local fishers on sustainable harvesting of flower shrimp. Legal compliance and sustainable fishing practices is the base for developing the voluntary code of practice. By adopting the fishing practices described in this Code, the fishermen will contribute to sustainable fishing practices by securing a healthy shrimp stock, thereby minimising a degrading impact on the marine ecosystem. 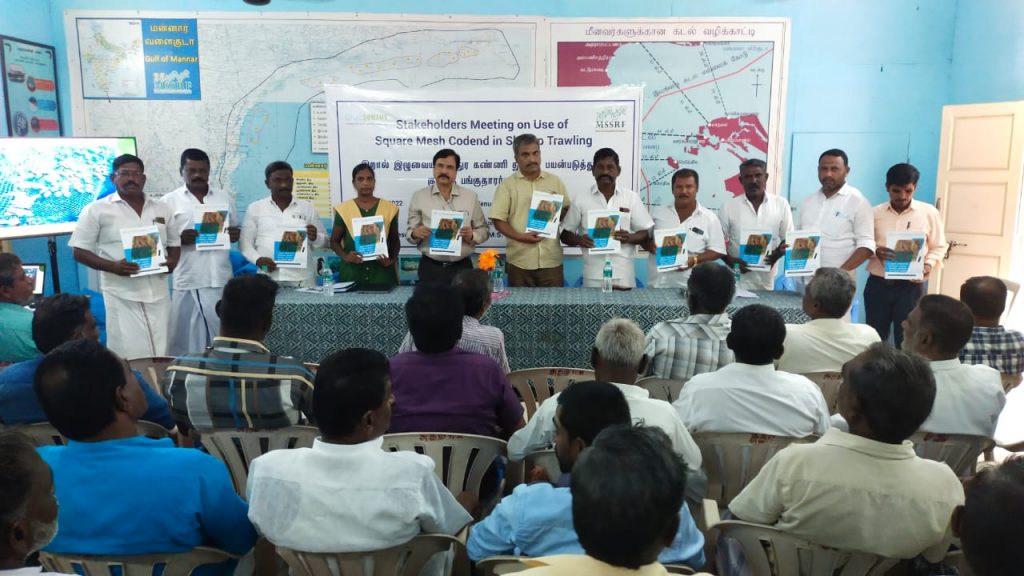 In his speech, Dr Hariharan also highlighted what MSSRF is doing in natural resource management using participatory bottom-up approach, and the need for such approaches in fisheries management that is vital for sustainable management of fishery resources in the region. The catch data from the fishers are significant for decision-making and additional strengthening of research.

Dr. S. Velvizhi, Head of MSSRF Fish for All Centre in Poompuhar, is the Principal Investigator of the project, She presented research outcomes of the study conducted in the Palk Bay region by the Centre. Among the three BRDs tested, she highlighted the square mesh cod-ends with a mesh size of 25 mm (12.5 mm bar length) as the most effective in the reduction of bycatch and the least reduction of commercial catch when compared to the control net in flower shrimp trawling. On an average, the reduction in the bycatch was about 3-5 kg per hour of operation, which is incredibly significant. The fraction discarded comprises of juveniles from commercially important species, which if allowed to grow can fetch nearly three/four times more than the price it fetches when released from the bycatch. 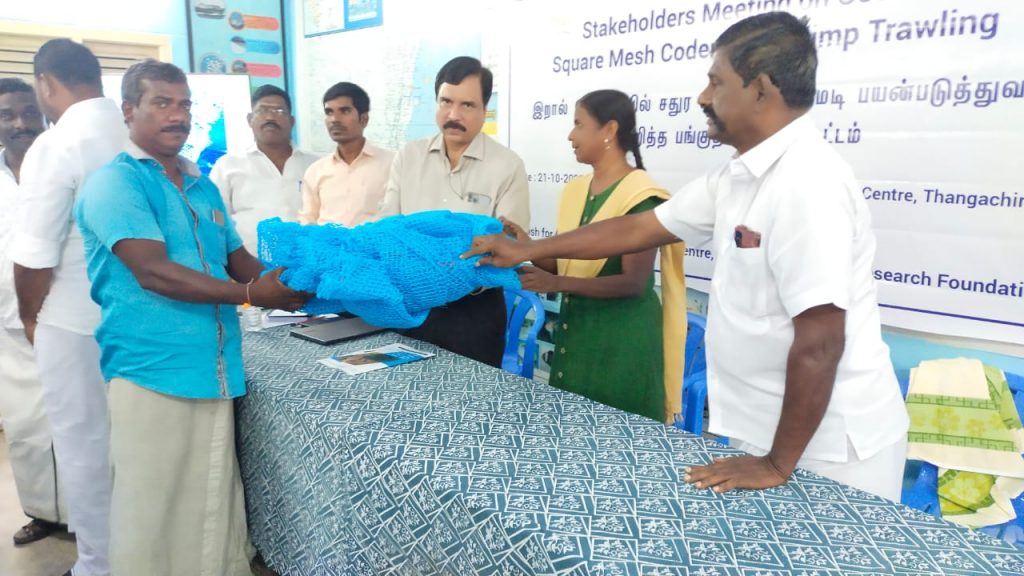 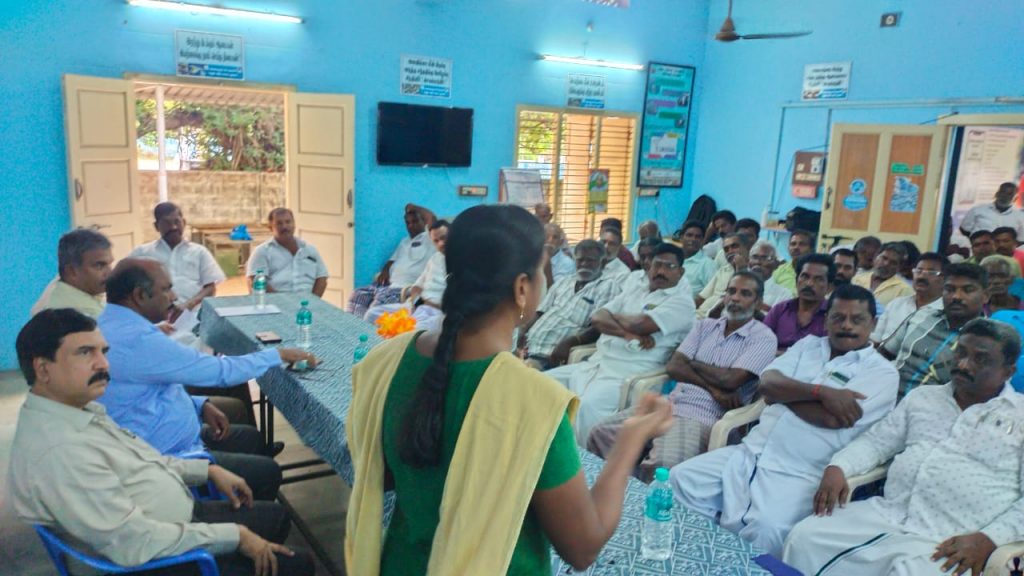 Dr. Tamilmani, Scientist In-charge, CMFRI, Mandapam, and Dr. Kathavarayan, Deputy Director, Department of Fisheries, Ramanathapuram, spoke on the importance of sustainable fisheries and promoting square mesh cod-end in Rameswaram region to protect the marine environment and securing the livelihoods of fishers in the areas. Fishermen Association Leaders from Mandapam and Rameshwaram – Mr N.J Bose, Mr. Jaheer Husain, Mr Balasubramaniyam, Mr Sultan, and several other fishers took part in the event by sharing views and experiences in the research trails during the implementing of square mesh cod-end in trawlers and how their contribution helped to minimise bycatches in shrimp trawling.

More than 100 fishers and fishermen association leaders participated in the event. 25mm square mesh cod-end suitable for flower shrimp trawling has been distributed to 75 selected master fishermen who voluntarily came forward to use square mesh cod-end and promote the concept in the region. They have also agreed to provide commercial catch data after using square mesh cod-end for further analysis and decision-making. This is a new milestone in the journey of research that involves fishers in participatory research, and in collecting commercial data for decision-making.

The participants of the event were welcomed by Mr. Thamizhazhagan, MSSRF and Mr. Kevikumar of MSSRF delivered vote of thanks.