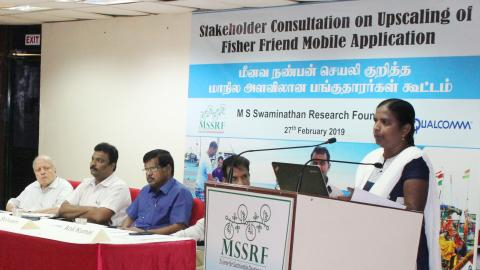 Chennai, February 27, 2019: Fisherfolks are the most vulnerable communities witnessing declining trends of livelihood security, increasing poverty, vulnerability leading to the competition among different fishing systems, over exploitation and depletion of marine resources. Climate change and the rapid pace of development have further put these vulnerable communities at high risk. Fishermen live precarious lives, largely depending on the knowledge of sea, weather, and the market for their lives and livelihoods.

In this scenario, after the Tsunami that hit in 2004, MSSRF started a research and training centre at Poompuhar named as ‘Fish for All Research and Training Centre’ and also developed mobile advisory system in 2007 in collaboration with Qualcomm, which has undergone many updations and has been fine-tuned as an android mobile application that behaves as a ‘shore to shore’ guide supporting the fisherfolks on ‘informed decision and informed fishing’. It has transferred knowledge in multiple platforms to address the fishing occupational hazards and has empowered the community.

The consultation bagged the ideas of stakeholders from the Government, NGOs, Network Providers, Fishermen Associations, and Academic / Research Institutions on how it can be reached to all the fisherfolk in India targeting 9 lakh fisherfolks currently.

Fishing is the second riskiest job in the world said Dr GS Sameeran IAS, Director of Fisheries, Tamil Nadu Government. He spoke about the importance of inter-sharing the traditional knowledge with the other fishefolks across the country and said Tamil Nadu is pioneering on supporting the fisherfolks on building resilience with the help of technology. “Referring the FFMA as an original model, with the help of the FFMA technical team at MSSRF the Tamil Nadu Fisheries Department has also developed a mobile application named ‘Thoondil’ for supporting the fisherfolk that would co-exist with FFMA. As a three-tier system, the android application may be used by fisherfolk till they travel 5 nautical miles, then the VHF sets for the next 50 nautical miles and navic or satellite phone for more than 50 nautical miles. Funds are allotted and all set by the Tamil Nadu Government to provide the sets to the fisherfolks in Chennai and Nagapatinam” he said.

Dr S Velvizhi the FFMA Project Head said “the application has influenced the decision making among the fisherfolks as a chain impact facilitating application of knowledge, behavioural change, negotiation skills in marketing that has brought about economical benefits and lastly risk reduction”.

Dr N Anil Kumar, the Executive Director of MSSRF said “MSSRF envisions a convergence of institutions for the betterment of the fishing community. It is not only ‘Fish for all’ it must be ‘Fish for ever’, so FFMA is a tool to achieve this sustainable development”. During the speech of Dr V Selvam, the Lead for Coastal System Research and Climate Change at MSSRF said, “even 1 degree rise in sea surface temperature has a profound implication on ocean parameters such as wave heights, wind speed, and ocean currents. And at these times the rich traditional knowledge itself might go irrelevant and it’s the technological intervention like FFMA that would play a vital role”.

Prof MS Swaminathan while delivering the presidential address said that the Government as various acts to help the marginalised farmers, it should also bring in more acts to help the fishing community. He also said that calamity is an opportunity, that ounce of practice equals tons of theory, it’s only after Tsunami the importance of conserving the mangroves was realised. Let this meeting be a new dawn to the fisherfolks across the coast of Tamil Nadu.