The varied emotions of the Corbett tiger: a photo journey showcased at MSSRF 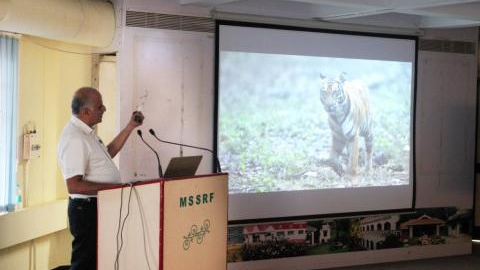 Chennai, December 27, 2017: It may take six years to actually see a tiger, or you may see six tigers in one visit – that is the unpredictability of trying to photograph the elusive national animal. A series of photographs of the tigers as well as other wildlife in the Corbett Tiger Reserve were showcased at a seminar by Mr K Rajiv, a regular traveller to Corbett in a seminar at the M S Swaminathan Research Foundation today.

Speaking on the subject – ‘Corbett – Tigers and Beyond’, Mr Rajiv, spoke of his initial frustration at not being able to see a tiger in his first six visits to the reserve. “The Project Tiger seems to have visibly helped since over the past few years, we have been sighting as well as photographing minimum one tiger during every visit,” he said.

The tiger is a shy animal, particularly the males, and with any sound of a jeep, the tiger disappears into a thicket. The tiger also masks itself in elephant dung so that its scent is not given away to the prey. “The female tiger is not usually shy”, he added. There are two ways to spot that a tiger is near- one is through its pug marks and the other is through alarm calls- from deer, monkeys and peacocks.

“However, it is not enough to just see the tiger we wanted to capture it on camera and once we captured it on camera, we also wanted the emotions”, he said sharing photographs of tigers as they stepped into water bodies and stood poised for a kill – a range of emotions over the years.

The tigers in the Corbett National Reserve are named based on the location they are seen- so there is a ‘Parwali’ female tiger, and another tiger named ‘Chuhapani’ male. ‘Sharmili’ is however the most photographed tiger here and Mr Rajiv said three generations of a family of tigers have also been recorded here. It was a virtual treat for the audience, who were instantly transported to Corbett based on the sights and sounds from the presentation.

Speaking on the occasion, Prof M S Swaminathan complimented Mr Rajiv for his patience in documenting the tigers as well as other wildlife in so many different forms over the years. He spoke of the need to learn the harmonious ways of living from animals. A number of wildlife and environment enthusiasts, scientists and scholars attended the programme.